The Sensors that Enable Precision Agriculture 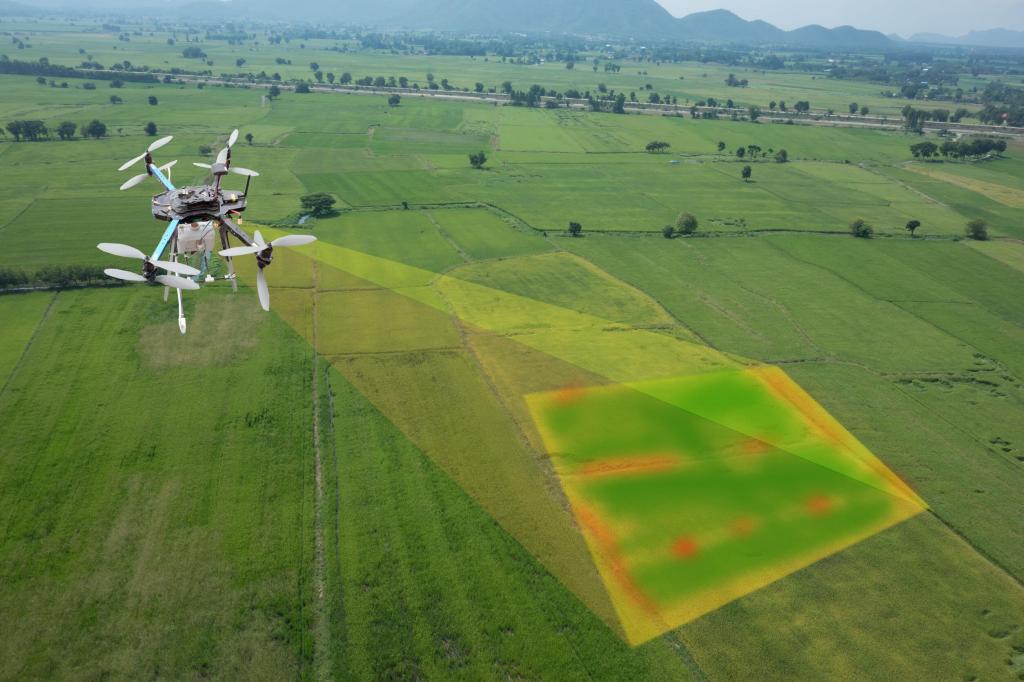 The proliferation of IoT technologies along with data analytics, is dropping the cost of sensor-based crop, livestock, and resource management practices known as precision agriculture.

Two powerful trends – the Internet of Things (IoT) and data analytics – are generating lots of press for their industrial and infrastructure applications. But there is another application space that is quietly gaining momentum in the application of these technologies: food production. Farmers are improving yields, reducing loss, and reducing cost by making more targeted use of resources such as fertilizers and water. The starting point for this "precision agriculture" is data, which sensors and wireless networking play key roles in gathering.

There are essentially three platform types involved in precision agriculture: aerial, ground-based mobile, and stationary systems. The sensors and network technology the platform types tend to utilize do vary, although there is also some overlap. One thing the platforms share, though, is tremendous diversity in feature sets of the many competing products addressing this application space. 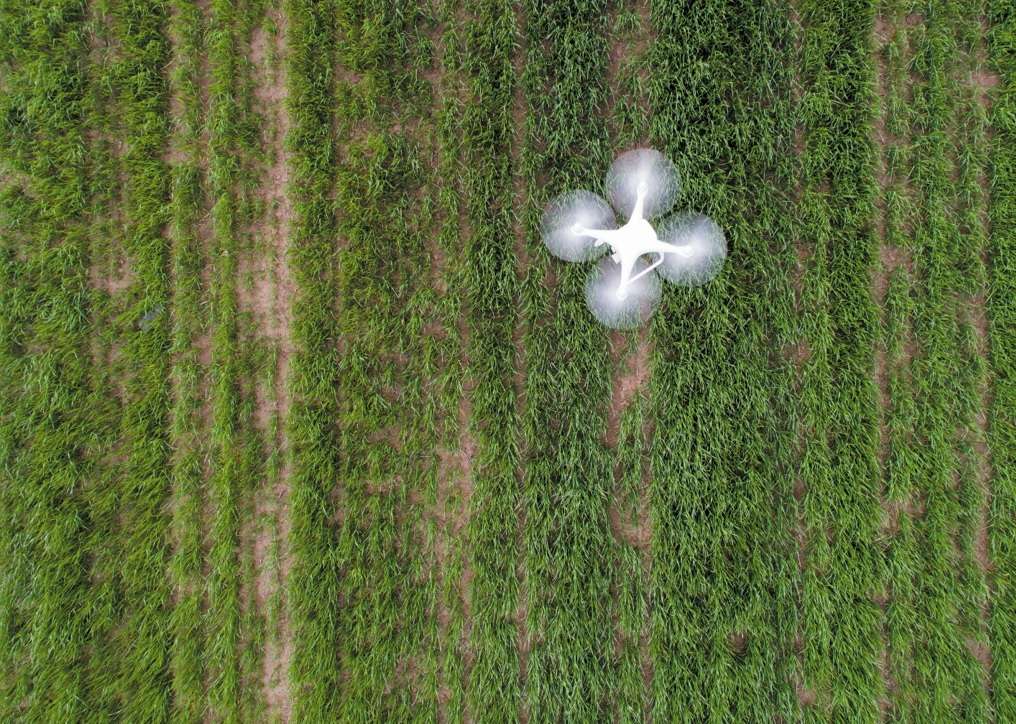 The aerial platforms seek to gather data about crops and fields from above using remote sensing. The sensors may be located on piloted aircraft or satellites, but increasingly are being carried by unmanned aerial vehicles (UAVs) – drones – of either fixed-wing or multi-copter design. Outfitted with a precision positioning sensor, such as the Ublox F9 precision GNSS module, drones are particularly suitable for surveying small- to medium-sized fields for plant health monitoring, with aircraft and satellites providing larger area surveys.

The primary sensor in plant health monitoring is a multi-spectral camera that can take high-resolution images in both visible and near-infrared (NIR) light. Most CMOS image sensors can provide such images, although most commercial cameras cannot. The key to this apparent contradiction lies in filtering.

The figure below shows the quantum efficiency (i.e., sensitivity) of a typical CMOS image sensor, in this case from ON Semiconductor, as a function of wavelength. The sensor includes built-in red, green, and blue filters in the typical Bayer arrangement, but even with blue filtering there remains a considerable sensitivity in the IR wavelengths. Most general-purpose cameras thus add an IR blocking filter in front of the sensor in order to render visible-light coloring more accurately. 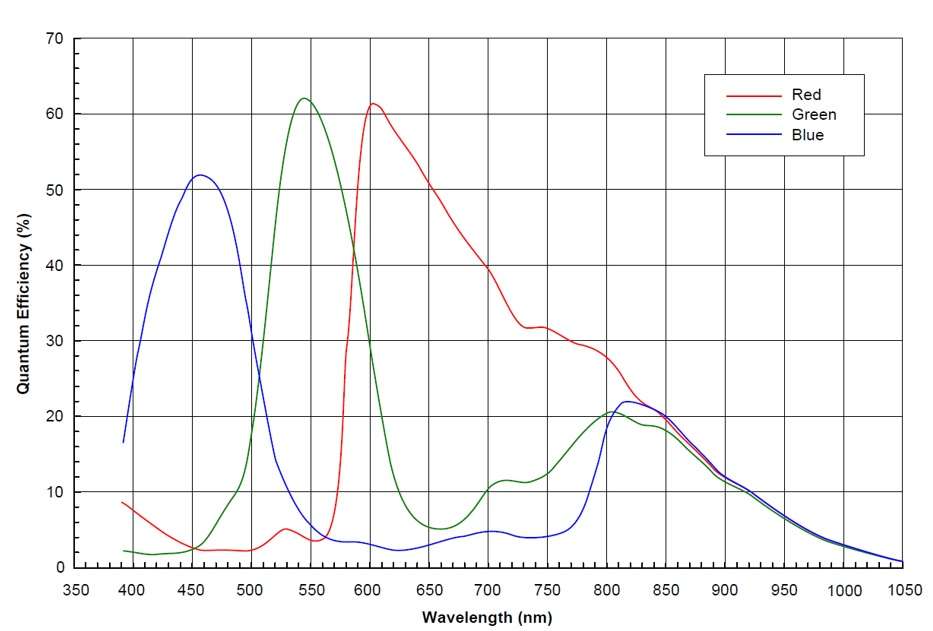 For plant health monitoring, however, this IR sensitivity is a blessing. The leaves of healthy plants will reflect more IR and absorb more red light than those of stressed plants. This has led plant scientists to define the "normalized difference vegetation index" (NDVI) – (NIR-Red)/(NIR+Red) – as a measure of plant health. With the right filtering and some basic image processing, then, a CMOS image sensor can be turned into an NDVI sensor like the Sentera AGX710. Aerial platforms provide the perspective needed to survey the plant health of entire fields with a single system. 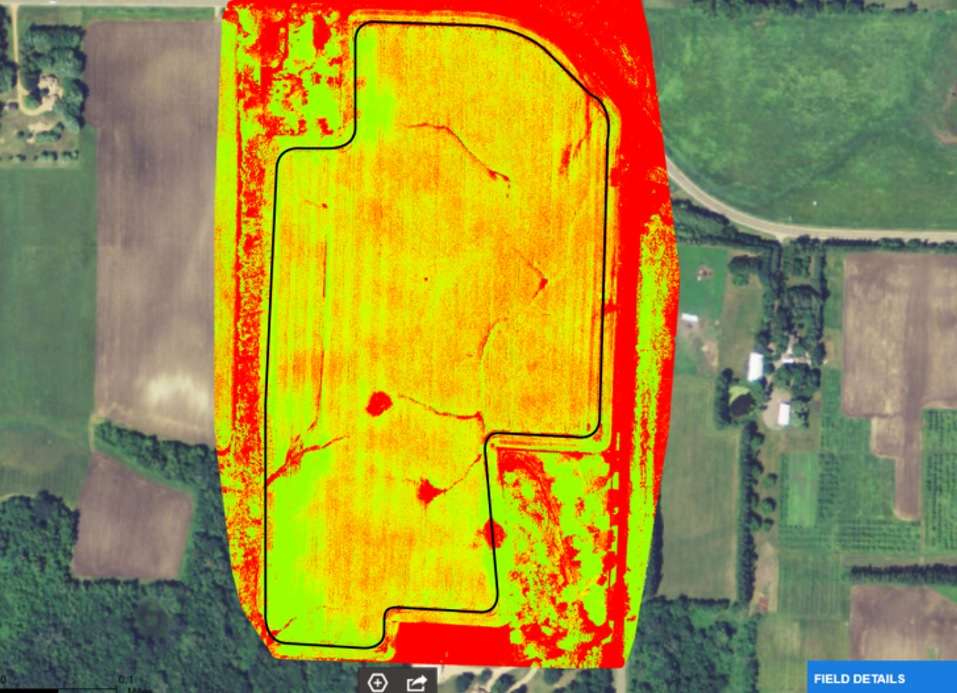 For the most part, the network communications needs of aerial platforms is minimal. Some systems do offer WiFi links to smartphones to offer real-time survey results. Most, however, simply store the image data on removeable Flash cards for later processing.

This use of Flash storage rather than network linking is also common in mobile, ground-based precision agriculture platforms such as tractor attachments and robotic vehicles. The data their sensors gather might be displayed in real-time for the driver, but like aerial platforms the data seldom gets sent live to a network. The types of sensors involved, however, are completely different.

The kind of centimeter-level mapping precision these mobile platforms offer requires more than satellite navigation sensing, however. Satellite navigation is typically only accurate to around a meter. To further refine positioning, some kind of inertial measurement unit (IMU) such as those available from Analog Devices may be required. The same type of precision that informs the mapping effort can then be used to guide the application of seeds, fertilizers, and pesticides as well as to guide harvesting machinery to avoid overlap when reaping. 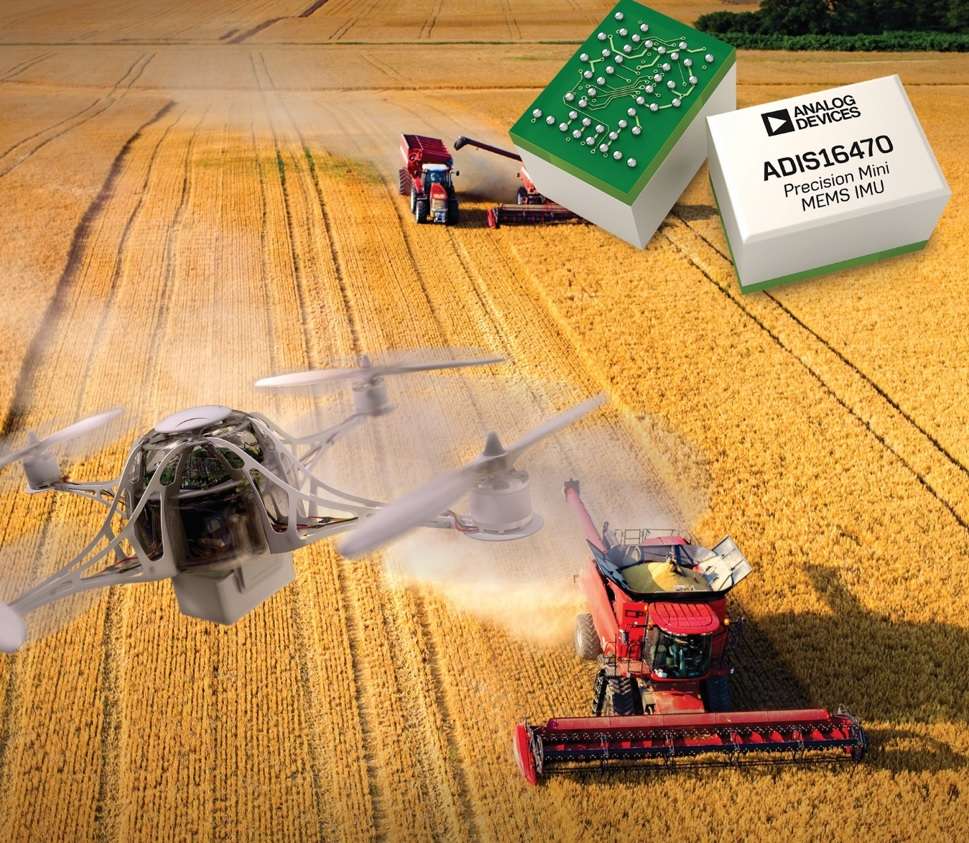 The precision agriculture platforms that do not typically require built-in position sensors are the stationary, ground-based systems, although it is still important to log their position when first placed. Also unlike the other platform types, stationary systems rely heavily on network communications capabilities. A variety of communications options are being used in agriculture, with the choice often situation dependent, including cellular, mesh network, LPWAN (LoRa, SigFox, 6LoWPan, and the like) and direct device-to-gateway configurations. Some companies, like NFC Group, are offering proprietary communications technologies. Others offer stationary sensor platforms with any of these communications choices available as customer-specified options.

These stationary systems offer a wider range of sensor types than the other platforms, as well. Localized environmental and weather monitoring (temperature, rainfall, insolation, wind, and the like) is available from companies such as Davis Instruments. Companies like Arable offer plant health sensors along with environmental monitors to match actual plant growth against expectations. Systems such as those from DTN trap and count specific pest types by using pheromone-based attraction in order to identify potential infestations. Soil moisture (measured by using capacitance or other electromagnetic properties of the soil), evapotranspiration rates, leaf wetness (due to rain or condensation), plant height, and even the thickness of stems and trunks or the size of growing fruits (dendometry) are all potential sensor options for agriculture.

Recommended
Can Drones Unlock Secrets in the Soil

Stationary systems are where much of the sensor product development for precision agriculture has been occurring, in part because they offer the greatest potential for volume sales. A single aerial or mobile sensing system can service all a farmer's fields but gathering data of sufficient granularity for maximum benefit will require numerous stationary sensor systems to be deployed. As a result of this opportunity many small to mid-sized companies, like Vinduino have arisen with offerings dedicated to the precision agriculture market. Key characteristics of such systems are solar power, low cost, and integration with wide-area networks and cloud services to handle the data.

Major companies are taking note of the opportunity, as well. Analog Devices, for instance, has begun working with clients to integrate its sensor and ioT technologies into agricultural applications. Communications companies like Libelium and Semtech are offering sensor platforms that can accept a wide variety of agricultural sensor types and send their data to cloud-based analytics services over their networks.

Although precision agriculture has been explored for more than a decade, however, supporting such sensor-driven farming is still a nascent industry. According to the USDA, adoption of the approach is still hesitant and weak. So, organizations such as the ISPA (International Society for Precision Agriculture) and the Norwegian Center for Precision Agriculture are actively conducting research and promoting the approach to help further adoption of the approach. Further, the base technologies are continuing to come down in price, eroding one of the primary barriers to adoption for many farmers. And the USDA indicates that most food producers acknowledge that they will have to adopt the technology eventually.

Adoption can be none too soon. The world's population is on track to rise to more than 9 billion in the next few years. The estimated 70% food production increase that full implementation of precision farming will become necessary to meet the demand. For developers, that means there remains great potential for the agricultural sensor system market.