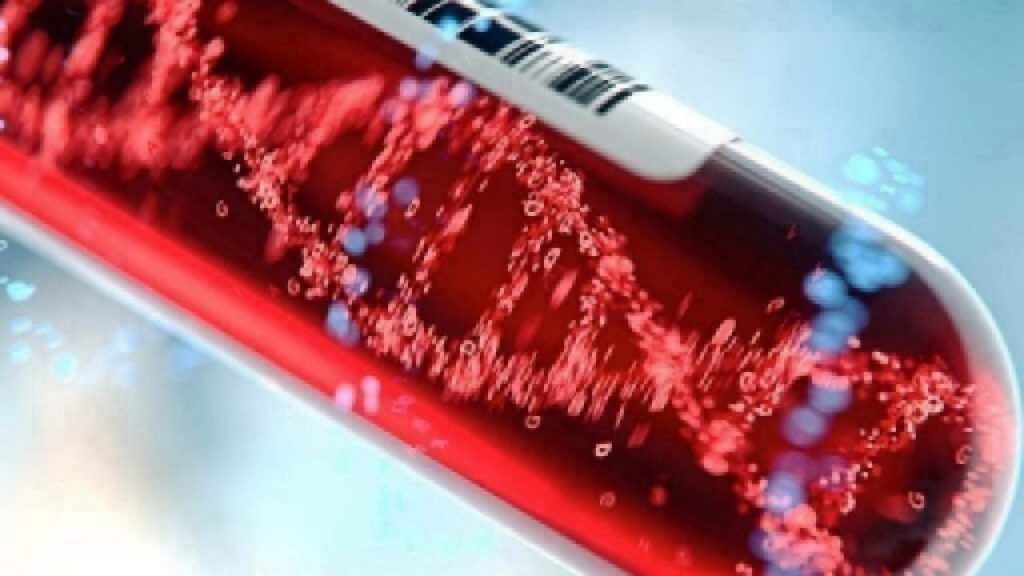 The race against time to fight the Covid-19 pandemic has motivated a global flurry of activity and collaboration by technology companies.

On March 21, 2020, the U.S. Food and Drug Administration gave emergency authorization to California’s Cepheid to sell a new test for the rapid detection of the SARS-CoV-2 virus, which causes Covid-19. Cepheid, founded by Kurt Petersen, Allen Northrup and five others in 1996, has been well known in the MEMS community for commercializing microfluidic chip-based polymerase chain reaction (PCR) analysis machines. This is not the first time Cepheid has responded quickly to a biological threat; after the 2001 anthrax terrorist attacks in the USA, Cepheid was the first to provide rapid anthrax detection capabilities to the U.S. Postal Service, and still does today.

At the heart of all Covid-19 test protocols today is the real-time reverse transcription polymerase chain reaction (real-time RT-PCR) analysis technique. In a very simplified description, real-time RT-PCR uses thermal cycling to amplify the DNA present in a patient’s swab sample, and then using fluorescence optical detection, searches for the virus’s specific genome.

This test requires knowing the virus’s genome in the first place; the crucial work to sequence the full genome of SARS-CoV-2 was first published by Chinese scientists for public use on January 10, 2020. Once the genome of the virus was identified, it took a German-led team only 7 more days to publish the first protocol, now adopted by the World Health Organization, for testing patient samples. Work is already underway to detect the virus through other detection methods that could be faster and cheaper to implement, such as antibody testing or CRISPR-Cas13 tests.

Traditional PCR machines take many hours to thermal cycle and reach a result. Additionally, due to the potential low viral load in a patient’s swab sample and inherent limits to DNA amplification, traditional PCR methods can result in a significant number of false negatives. When trying to fight a contagious disease outbreak, tests must be both completed quickly, ideally in minutes while the patient waits, and accurately, in order to prevent a positive patient from being prematurely released and putting others unnecessarily at risk.

MEMS technology brings two major benefits to PCR: reduced size and microfluidic integration. MEMS-scale heaters and reaction chambers have a tiny thermal mass, thereby creating a significantly faster heat-cool cycle and enabling a rapid result in minutes. Microfluidic integration for sample and reagent handling has enabled novel techniques impossible at the macroscale, such as digital PCR (dPCR). The digital PCR method uses microfluidic channels to partition a patient’s sample into many individual samples, among arrays of microwells or emulsions of microdroplets (the latter known as droplet digital PCR, or ddPCR). These microsamples then undergo parallel PCR processes, which when aggregated, generate a total count of the number of target molecules in the sample. This micro-scale parallel processing of a sample significantly improves the lower detection limit, thereby increasing the accuracy of a test result. 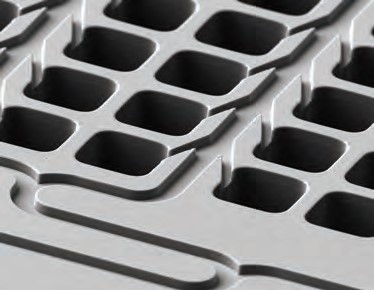 The superiority of MEMS and microfluidics-based PCR tools and techniques to detect SARS-CoV-2, compared to traditional PCR, has recently been demonstrated in a study funded by Hubei Natural Science Foundation and published on March 6, 2020. Droplet digital PCR (ddPCR) and traditional PCR were used to test patient samples. The results of this initial study (yet to be confirmed with further clinical trials) showed that ddPCR had a threshold for detecting SARS-CoV-2 that was 500 times lower than that of traditional PCR. This result means that in cases where the patient’s sample might have a low viral load, ddPCR has a much higher chance of correctly identifying a positive patient versus traditional PCR.

Development of MEMS PCR chips began back in the early 1990s. Allen Northrup’s group at Lawrence Livermore National Laboratory published a paper in 1993 on the first silicon-based PCR chip, which was eventually licensed by Cepheid in 1996. Research continued steadily throughout the decades on how to use MEMS materials and methods to create novel PCR chips and micro total analysis systems (uTAS) from silicon, glass and even plastic substrates.

Today, academic researchers are focusing on using microfabrication methods for developing highly integrated lower cost systems, specifically for point of care use. One example of recent research: a team at Korea’s ETRI and Genesystem have developed a prototype low-cost, handheld PCR system having a polyimide (polymer) chamber and microheater and an integrated CMOS detector for optical readout of results (figure below).

The race against time to fight the Covid-19 pandemic has also motivated a global flurry of activity and collaboration by technology companies. France-based Stilla Technologies, a pioneer in crystal digital PCR, has partnered with Chinese firms to provide their Naica digital PCR system to the cities of Zhengzhou and Xinyang in order to help them better detect the coronavirus and monitor its mutations. In the U.S., California-based Bio-Rad announced on March 19, 2020 that their QX200 Droplet Digital PCR (ddPCR) System has superior sensitivity and precision for clinical detection of SARS-CoV-2 compared to existing test methods that are performed using qPCR. Bio-Rad is now working to make ddPCR-based tests available for Covid-19 detection, in partnership with Biodesix in Colorado, under an Emergency Use Authorization (EUA). Even Bosch, best known in the MEMS industry for their portfolio of MEMS sensors for automobiles and smartphones, is offering a rapid test solution with their Vivalytic analyzer in partnership with the Irish company Randox Laboratories Ltd. 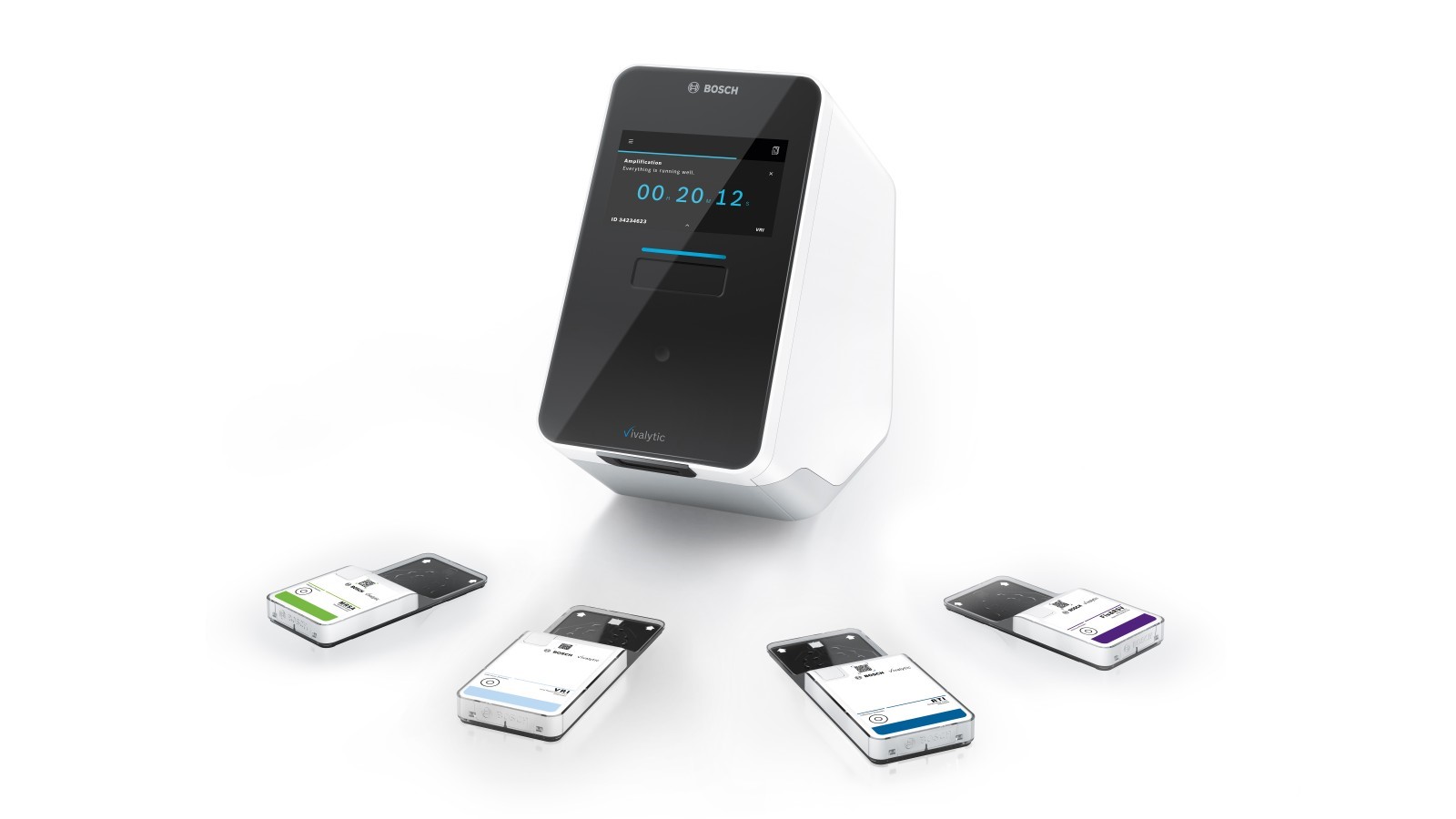 Vivalytic analyzer and test cartridges, to be sold in Germany by Bosch Healthcare Solutions beginning in April 2020.
(Source: Bosch GmbH)

South Korea’s quick recruitment of its biotech companies to make wide-spread testing available helped it to better pinpoint its Covid-19 outbreak and to implement effective control measures. Let’s hope the rapid tests now offered by Cepheid and other companies can be similarly effective in this global fight. One thing that seems certain, based on successive epidemics of SARS, MERS, and now Covid-19, is that rapid PCR test machines are essential medical tools in the fight against viral outbreaks. As continued worldwide research and development aims to lower their cost, increase speed of results and improve accuracy, we may very soon have a PCR machine, enhanced by MEMS technology, in every doctor’s office.