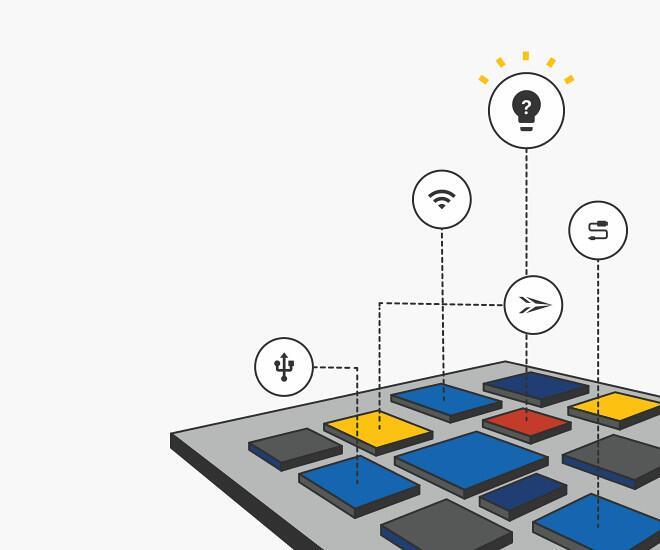 IoT in India is headed for the Trough of Disillusionment in Gartner's Hype Cycle for India. The firm calls for realignment of IT and operation technology resources, processes and people.

India is narrowing the technology lag with other major technology markets as more local vendors enter both emerging and mature technology segments in the country, including areas like the Internet of Things (IoT) and software as a service (Saas), according to market research firm Gartner.

"When comparing the technology entries for India and the rest of the world, we noticed that the overall technology lag—that is, global traction versus India traction—is gradually closing. India has evolved from an ICT environment that was about 18 months to two years behind global trends at the start of the decade, to one in which most trends are in sync with global trends," said Santhosh Rao, principal research analyst at Gartner. "It’s clear that many of the technologies on the 2016 Hype Cycle for ICT in India also appear in the global ICT Hype Cycle."

The Hype Cycle for ICT in India, 2016 (see Figure 1) identifies 25 key technologies at various states of maturity that are most relevant for information technology in India and positions them on the Gartner Hype Cycle. This provides a snapshot of technologies that CIOs and senior IT leaders in Indian enterprises should consider when transitioning to digital businesses. 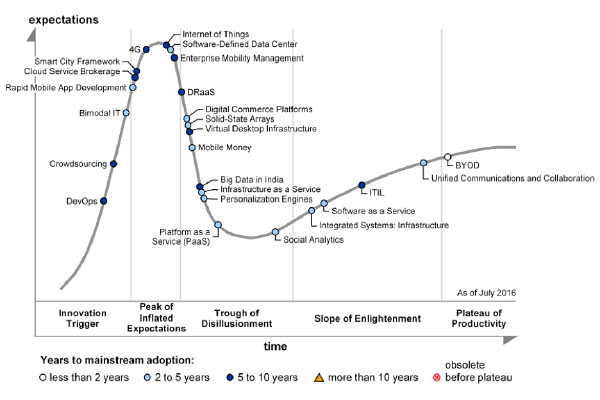 Beginning its ascent of this year’s Innovation Trigger is DevOps. The rise of digital business is driving increased awareness among Indian infrastructure and operations (I&O) teams about DevOps which focuses on rapid IT service delivery. The fundamental principles of DevOps aim to build an agile and flexible bridge between the development and operations functions of IT. These principles encourage a culture of innovation, small and quick releases, failing fast and inexpensively, learning from failures and supporting systems of innovation in a pace-layered approach.

Just ahead of DevOps on the Innovation Trigger is crowdsourcing. Crowdsourcing in India today manifests itself in four areas: crowdsourced communities for application development services; innovation platforms; hackathons and initiatives by local and central government. Crowdsourcing offers the potential to open up innovation efforts by stimulating and capturing creative ideas from outside an organisation. This approach can dramatically increase the available human insight that can be applied to a task or challenge. Government organisations are particularly well-positioned to take advantage of the willingness of citizens to help in areas that reflect their local environments or special interests.

Poised just past the peak of this year’s Peak of Inflated Expectations, heading for the Trough of Disillusionment, is the IoT. The IoT can benefit Indian enterprises in multiple ways, but for successful IoT implementation, Indian organisations will first have to understand the business use case for which they want to use IoT. Success will also depend on aligning the IT and operation technology (OT) resources, processes and people carefully. Therefore, experimenting with pilot projects to understand the implications on people, process, technology and the business is an essential first step for Indian organisations.

"The Indian economy is in good shape, and government initiatives such as ‘Make in India’ and ’Digital India,’ are positive measures that are driving investment in India by multinational companies," said Pankaj Prasad, principal research analyst at Gartner. "The computer software and hardware segments had a foreign direct investment (FDI) inflow of ₹39,330.71 crore ($5.9 billion) during the period from April 2015 to March 2016. This is an increase of nearly 150% compared with the same period last year, and Gartner expects these investments to gather further momentum toward the end of 2016."