Home » Huawei: UK Carriers to Be Hit by Clampdown

Huawei: UK Carriers to Be Hit by Clampdown 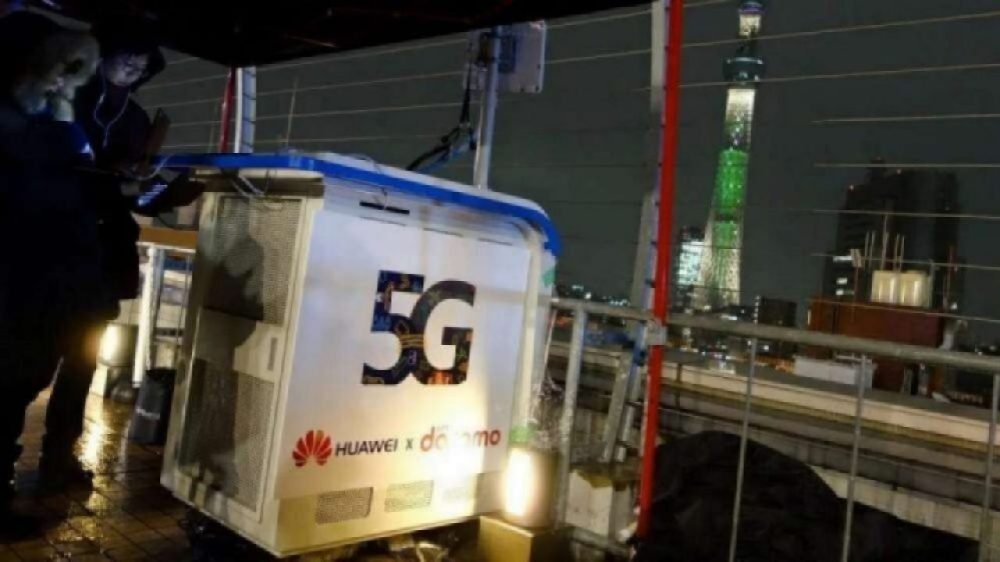 Strict limits on Huawei gear appears to be an opportunity for Nokia and Ericsson, but they put BT, Vodaphone, and Three in a bind.

The U.K. Government’s decision to allow Chinese infrastructure group Huawei to continue supplying equipment in the country, but at a controlled rate, will have significant and lasting implications for many in the industry, even leaving aside the politics and security concerns.

Huawei has also been excluded for gear in the security sensitive ‘core network’ as the country gears up for 5G.

Those with the biggest calls to make include: the country’s mobile and landline network operators — notably BT, Vodafone and Three; Huawei itself as regards its business in the U.K., perhaps its most significant in Europe; and the alternative network gear providers — Nokia, Ericsson, and Samsung.

Asked how they plan to exploit the opportunity, both Nokia and Ericsson declined requests for interviews with an executive.

Nokia merely stressed “this is a government decision,” but would not elaborate.

Ericsson sent EE Times a statement which stressed it was “at the forefront of 5G technology” and that it “stands ready to take necessary measures to fulfill all requirements relevant to Ericsson and our customers in the U.K.,” but it could not comment further as these are “national security decisions of different countries.” 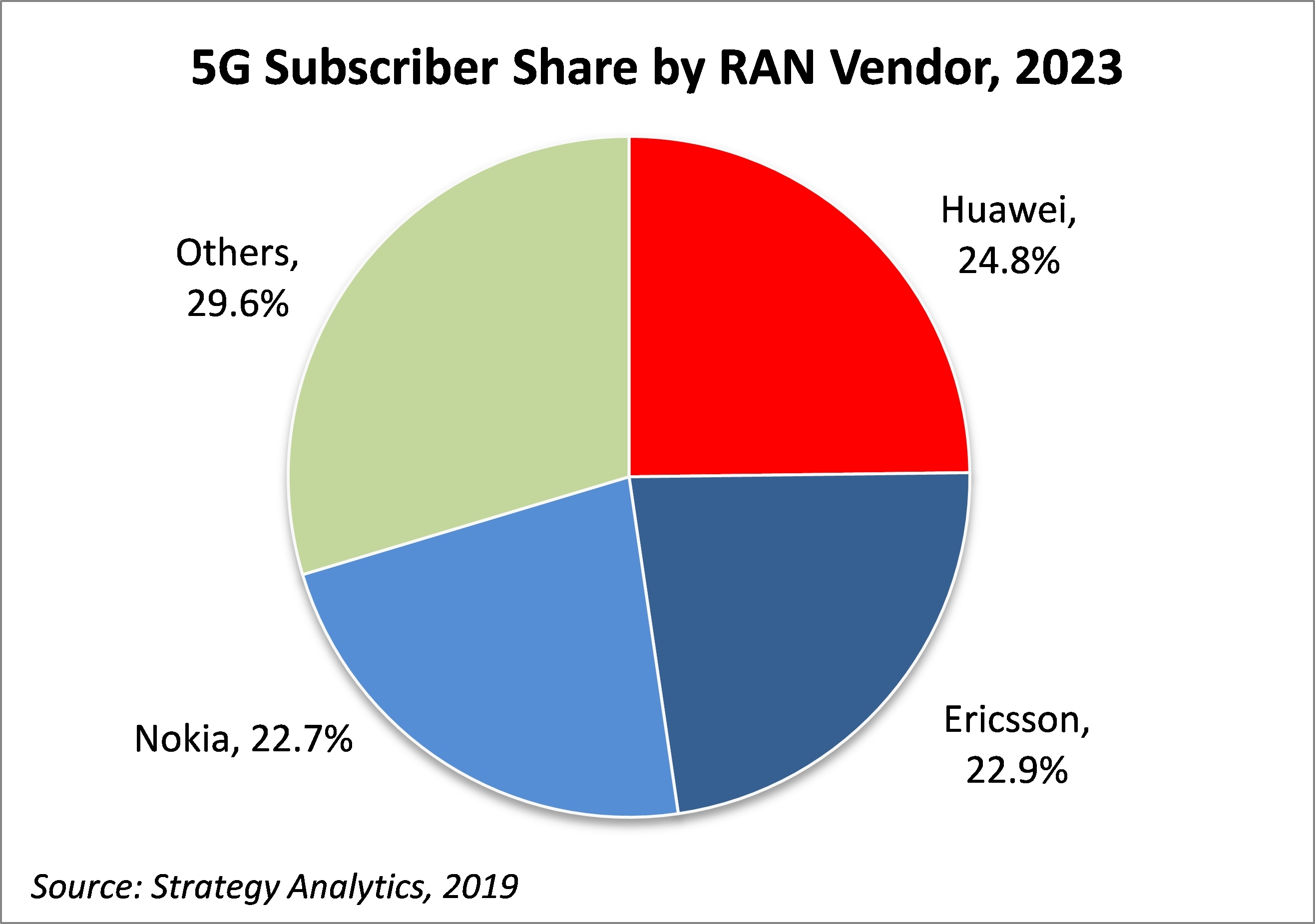 True, security issues are involved here, but we wanted to hear about the companies’ industrial strategies following the severe limitations placed on their fiercest competitor.

An important aspect of the ruling was that the government concluded that the U.K.’s security apparatus, possibly one of the most risk-averse and conservative in the world, has the means to manage the security issues around Huawei’s equipment.

Whether the U.S. administration will accept that position in the forthcoming — and for the U.K. hugely important — post-Brexit trade negotiations remains to be seen.

The decision also hugely impacts the timescales and costs of rolling out 5G in the U.K., already lagging behind other countries.

A recent analysis suggested that, based on the prices operators in the U.S. have to pay for their infrastructure gear — where of course Huawei is banned — mobile network operators (MNOs) in the U.K. face equipment costs 20% higher.

Crucially important facts like that have, in a sense unfortunately, placed the U.K. during the last six months or so at the epicenter of a global struggle to achieve cost-effective wireless infrastructure deployments.

This inevitably means ripping out a significant portion of the installed 4G equipment (operators must deploy the same vendor across 4G and 5G to avoid interoperability problems).

BT, for instance, estimates that the ruling will cost it £500 million (about $650 million) over the next four to five years due to the imposed rip-out-and-replace program. Analysts suggest the total bill for the four operators could reach £1.5 billion — and delay 5G by perhaps two years.

The national carrier is by far the most exposed, with a huge installed base of Huawei base-station equipment for its 4G network, notably at urban sites, as well as significant gear for its fixed broadband business. The restriction, to 35%, extends to fiber-to-the-premises (FTTP) network equipment, such as gigabit passive optical network (GPON).

Overall, BT estimates equipment at some 12,500 sites may be impacted for the overhaul, including fiber replacement.

With Nokia already in situ at BT sites not served by Huawei, and keen to avoid overreliance on one supplier, Ericsson is likely to see a big opportunity.

BT’s biggest headache is that it — having acquired EE to boost its mobile business — is alone in the U.K. with a ‘core’ network that includes Huawei gear. That infrastructure was installed in 2016, when the security issues and business practices of the Chinese vendor were yet to emerge and make the headlines in daily newspapers.

Three, the smallest of the country’s mobile network operators, is faced with perhaps an even bigger dilemma over its supplier strategy. Two years ago, it opted for Huawei to provide gear for its entire 5G radio access network (RAN), overlooking both Nokia and Samsung. Now, they will need to update that strategy.

Over at Vodafone, arguably the biggest mobile operator in the country, Huawei gear is already estimated at about 35%, so Ericsson and Nokia are clear favorites, with Nokia perhaps in the driving seat.

However, the operator warned that if other European countries followed the U.K. example, it would take a significant hit, as it has major operations there and uses Huawei gear in many of the core and noncore parts of the networks, including in Germany.

O2, meanwhile, has few worries as it has minimal Huawei gear, with the Scandinavian duo reportedly roughly sharing the RAN spoils.

As regards Huawei, the company ironically claimed the Johnson government ruling was a positive — especially following the intense lobbying from the Trump Administration to ban the Chinese supplier altogether from participating in the U.K.’s 5G rollout.

But being dubbed a ‘high risk vendor’ and placed under significant supply restrictions that will not apply to its two main Scandinavian competitors, Nokia and Ericsson, can hardly be a positive message to carry when bidding for other national 5G orders, be they for RAN or ‘core network’ business.

And yet, as financial analysts were quick to note, the share prices of Nokia and Ericsson hardly budged on the news.

The bitter truth is that Nokia and Ericsson have lagged — and continue to lag — behind Huawei when it comes to RAN technology, have for long been deemed a more expensive option, and are still facing issues as operators gradually start rolling out their 5G networks.

It also puts the volume — if not the importance — of business in the U.K. into stark perspective. Of course many of the European operators are still deciding which way to go — but the likes of Germany and France could yet take their cue from the U.K.’s middle-of-the-road stance.

The Scandinavian duo may, however, be wise to tread carefully. Yes, they obviously see a big business opportunity, but with operators clearly unhappy that their views on the way forward have been overlooked, they might yet balk if Nokia and Ericsson see an opportunity to charge dearly for services and equipment.

It may be very much to their advantage, instead, to bargain for competitive prices for higher volumes of their 4G/5G RAN offers.

The cruel reality, though, is that the operators have few choices. Huawei, Nokia, and Ericsson account for about 80% of the global mobile infrastructure market. Samsung is making all the right noises as regards its technology, but it has yet to make a big breakthrough apart from its presence in the networks of its home country; and ZTE, the other Chinese vendor is, similarly, banned from most markets, including the U.K.

And Cisco, though having a successful product for the 4G LTE core, has yet to make any impact globally with its 5G Packet Core.

So, realistically, what choice did the U.K. have?

Invest in Nokia or Ericsson?
At least Prime Minister Johnson did not follow the example of his friend Donald Trump, who, via his attorney general William Barr, earlier this month suggested that one way to hobble Huawei in the global markets might be for U.S. firms to join and take a controlling stake in Nokia or Ericsson, or maybe both.

That provocative plan — presumably not run by either of the Scandinavian duo or the Finnish and Swedish governments — follows suggestions late last year that U.S. funding could be diverted to Nokia and Ericsson to help them in development and to increase production of their gear in the U.S.

Although Barr did not mention Cisco in his speech when floating the latest plan, the company’s CEO Chuck Roberts swiftly and categorically ruled out participating in any such approach, stressing that building the entire infrastructure for 5G did not fit the corporation’s current profile or strategy.

Barr’s thesis seems to be that if the U.S. industrial and financial community, with the backing of the Administration, were to put its muscle behind such a strategy, and combined with size of the U.S. market, it would create a group much more able to compete with — clearly — Huawei in global markets, and eliminate any security concerns.

Interestingly, Barr, a former legal counsel at Verizon, also poured cold water on suggestions that the U.S. should put significant resources behind the open RAN approach.

As EE Times recently outlined, this has been proposed and is under development as a long-term approach for wireless infrastructure, but Barr insisted the ‘openness’ concept is just “pie in the sky” and is no solution to current dilemmas.

That, likely, did not go down too well with the predominantly U.S. software and hardware companies, including some exciting start-ups, such as Parallel Wireless, Mavenir, and Altiostar, who are the leading proponents of this technology that proposes forcing open the RAN into its components.

Coincidentally, it is the U.K.’s Vodafone that is currently the biggest operator to be advocating — and trialing — open RAN, with software and hardware from Parallel Wireless and Mavenir.

Unfortunately, Barr is at least right in his assessment that while this openness would increase supplier diversity, it is still unproven in real-world commercial mobile networks.