5G Networks Need to be Adaptable

Today's wireless networks need the ability to adapt to use cases and business models," said Deepak Das to about 50 engineers at Verizon's East Coast Innovation Center.

Das is Sr. Director of Engineering/Chief Cloud Architect at Federated Wireless, focused on 5G, spectrum sharing, and the hybrid cloud. He spoke at a meeting of the Boston IEEE Communications Society Chapter on September 5.

Prior to 5G, the goal of developing a wireless network was all about speed, as in how many bits could the network deliver to users per second. "With 5G, there's no one-size-fits-all," said Das. Today, wireless networks must combine 5G, spectrum sharing, and hybrid cloud computing to reach the needed flexibility. 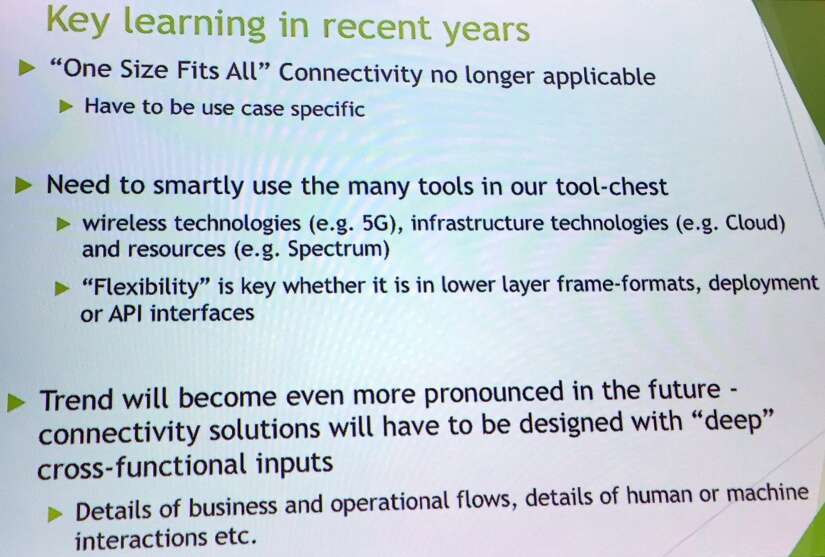 "You have to understand the use cases," said Das. "Connectivity no longer exists by itself. You need to know what's alongside the network." Das was referring to the changing nature of cloud computing. For example, computing is moving to the network edge, especially in the case of using wireless networks to control devices and systems where low latency is critical. That's where a 5G component called network slicing comes in. In network slicing, the wired part of the wireless network is virtualized; the result is that functions and operating characteristics can be allocated on an as-needed basis. Each customer gets a virtual "slice" of the network, with each slice behaving in a manner that befits the application.

Enterprise use cases, for example, include:

There is no single solution to the use cases.

Das cited a use case of video monitoring, which you might think requires high bandwidth. Instead, his customer sits the camera at the network edge and it performs the video processing. That relieves the network of both transmitting and doing the video processing. The result is that the camera doesn't need as much bandwidth as you might think — the camera needs only download the processed images to be used in machine learning. Das used this example to drive home his point that to design a connectivity solution to a problem, you have to know the use cases.

The world will not, however, be all 5G. Despite 5G's inevitable coming, people will not give up their Wi-Fi even though they complain about it, noted Das in response to a question. Wi-Fi will, according to Das, exist alongside 5G. I agree with that, for I always look for available Wi-Fi connections to minimize cellular data use.

You may have heard about shared spectrum. The concept, which I describe at length in Wireless devices need to cooperate and share spectrum, takes advantage of spectrum that has traditionally been used exclusively by the military. Wireless nodes let users share access to the 3550-3700 MHz band through a priority system. When the incumbent U.S. Navy need access to the band's 10 MHz slices, the nodes reallocate other users.

Citizens Band Radio Service (CRBS) works on a priority protocol the grant users access to a frequency band that was once the exclusive use of the U.S. Navy. (Photo: Martin Rowe)

The math involved in CBRS gets complicated when the Navy isn’t using it. The nodes have to figure out how to best allocate the spectrum among the priority (licensed) and general users. That depends on factors such as antenna height, signal power, location, and usage. Each night, the network evaluates how the spectrum was used and may change frequency and time allocations for the next day. Nodes may have to shift users among different 10 MHz bands depending on who needs access at a given time. When the Navy needs access, all others must relinquish possession. Sharing this spectrum with the Navy is an issue only in coastal areas.

Cloud computing is changing as businesses focus on the edge, bringing computing power closer to the user. That sets up a confrontation between the telcos and cloud computing providers. "There's a focus on the edge cloud," said Das. "The edge is taking on a different meaning depending on who you ask. What used to be called the 'mobile edge' is now being called 'multi-access edge compute' where you are exposing APIs and applications to network resources at the edge." 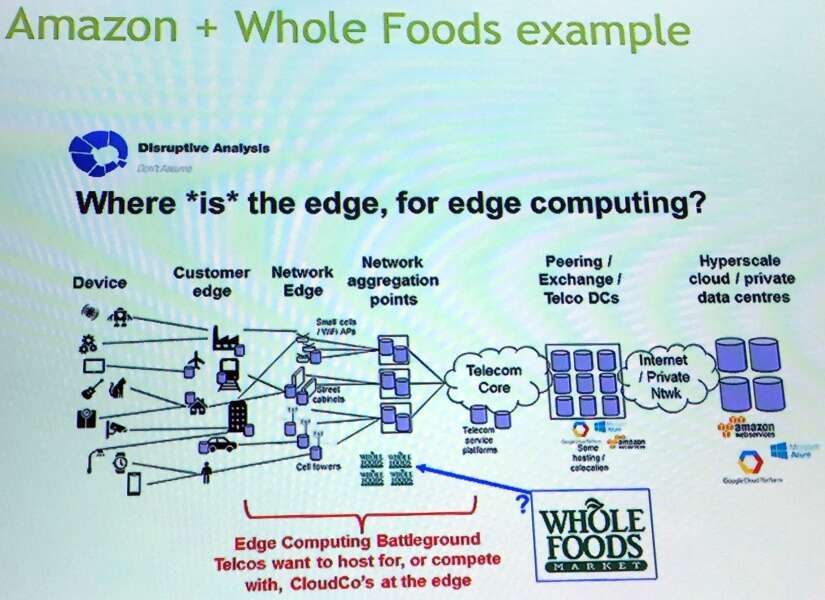 “I’d like a piece of that salmon, two lemons, and 1 TB of cloud storage, please.” (Photo: Martin Rowe)

In the figure above, you see Whole Foods as part of Amazon's network. "Whole Foods has what Amazon needs to house computers: cooling, space, and power." Could your local store sell you bananas and cloud services? The closest Whole Foods to me is much too small, but have you ever been to the flagship store in Austin?