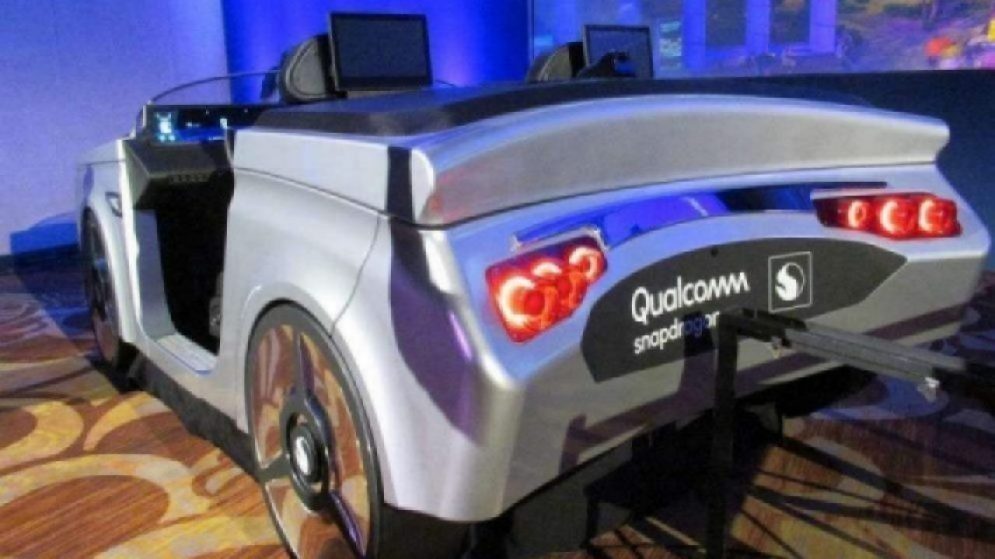 Had Qualcomm’s marriage with NXP been consummated, the Consumer Electronics Show last week would have been the stage to unveil the world’s largest automotive chip giant (Qualcomm/NXP). The merged company would have become the 800-pound gorilla in the automotive semiconductor business, covering everything from connectivity and in-vehicle infotainment to central computing for autonomy, safety, security and motor control.

As Mike Demler, a senior analyst at the Linley Group, told EE Times last month, “the end of Qualcomm’s quest to acquire NXP doesn’t alter the automotive industry’s established trajectory, but had it gone through, I’m confident the combined companies would have developed a powerful ADAS processor platform to compete with Intel/Mobileye and Nvidia Drive systems.”

Of course, the big deal fell through when China failed to approve it, leaving NXP and Qualcomm to pursue divergent paths toward conquest of the automotive market. NXP last week announced a deal with Kalray to beef up a central computing platform for highly automated vehicles.

Qualcomm dedicated more than 70% of its time during its CES press conference to touting its automotive chops, stressing dominance in connectivity and in-vehicle infotainment systems. 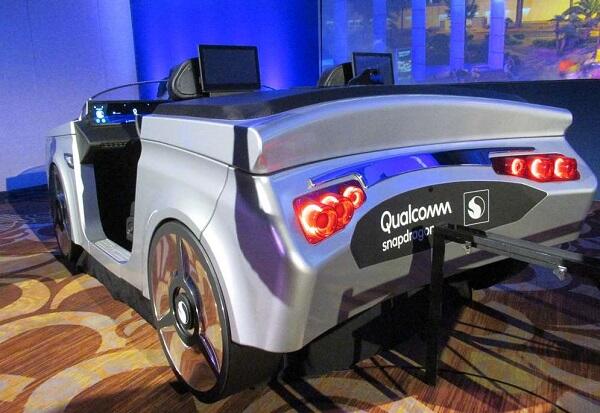 Qualcomm shows off a vehicle equipped with the 3rd Generation Snapdragon Automotive Cockpit Platform at its press conference at the Consumer Electronics Show. (Photo: EE Times)

Qualcomm also discussed its third-generation Snapdragon Automotive Cockpit Platform, built on the Snapdragon 602A and 820A. It divides the new platform into three tiers of cockpit products. Patrick Moorhead, president and principal analyst at Moor Insights and Strategy, tweeted that this will result in positioning Qualcomm’s “competitors as niche players.” Qualcomm called the new platform “the automotive industry’s first-announced scalable artificial intelligence-based platforms.” Moorhead believes it’s something NXP can’t provide.

Aside from what NXP can or can’t do, one thing is clear: Building a solid software framework that is truly scalable and can be exploited by various OEMs for different tiered products is Qualcomm’s bailiwick.

Many industry observers, aware of Qualcomm’s AI prowess — demonstrated by its multi-core AI engine, Kryo CPU, hexagon processor and others — also believe that Qualcomm is fully capable of moving into the autonomous vehicle.

Left unsaid during the press conference, though, was Qualcomm’s strategy beyond chips for cockpits. It turns out, as suspected, that Qualcomm has a “stealth program” for ADAS and autonomous vehicles. Qualcomm, however, limited demonstrations of Qualcomm-designed AVs and presentations of its autonomy program to a “selected audience” during CES.

Subsequently during the show, EE Times also talked with Anshuman Saxena, director of product management for ADAS and autonomous driving at Qualcomm, to learn some finer points on AV strategy.

In the following pages, we share excerpts of our conversation with Qualcomm’s Duggal.

Nakul Duggal: At Qualcomm, we think we’ve been an automotive-focused company since we started to supply modem chips to General Motors in 2002. By 2015 and 2016, Qualcomm has been supplying global modem solutions to pretty much everyone in the automotive market.

EE Times: What put Qualcomm in the lead?

Duggal: Car OEMs want a risk-free solution. Our success with supplying modem chips inside vehicles helped build a network of OEMs who chose to work with us.

EE Times: And that led to Qualcomm’s foray into the in-vehicle infotainment (IVI) systems?

Duggal: Back in 2013, Audi invited us to supply chips to their IVI as a second source to Nvidia…it opened the door for us. We spent good parts of the first two years learning about “automotive quality” and what it means to develop software for cars. Carmakers want in automotive software concurrency, instantaneous responses, interruptions of operations three or four times a day… we learned the hard way what car OEMs need. We also learned from scratch things like defective parts per million (DPPM) calculations. These collective experiences changed the DNA of the company.

EE Times: That must have been rough.

Duggal: But there is one thing we didn’t do. We didn’t throw silicon over the fence to Tier Ones and asked them to figure that out. We learned everything from virtualization to hypervisors. The software running in the IVI system demands a whole new level of complexity. Take the example of cars in China. Their IVI system must run everything from QNX for instrumental clusters to Linux for IVI and Alibaba for local apps…then AI. The system must be able to boot with little delay.

When different car OEMs want our chips to support a variety of operating systems and applications, what’s critical is a foundation layer of software, which allows OEM to transport what they want to put in.

Our experience in the mobile phone business working with so many customers has helped.

EE Times: What do you see lacking in today’s automotive industry?

Duggal: Tier Ones and OEMs are still maintaining their legacy business and relationships. Tier Ones tend to develop a region-specific solution, which they say is ‘a platform.’ But in reality, such a platform is often tweaked and tailored to a specific car OEM’s demand. So, what was initially pitched as a platform ends up in a number of fragmented solutions.

As Qualcomm, therein we see an opportunity.

EE Times: How so?

Duggal: Our approach is focused on scalability and software framework. We offer a platform that allows OEMs to build systems they can differentiate. This is easier said than done. Today, we have 400 software engineers exclusively working on automotive software. For us, this is really a heavy investment, but it’s required.

EE Times: Has your focused approach on automotive software altered the rest of the Qualcomm’s business in any way?

Duggal: We are at the point that the automotive team has begun influencing Snapdragon roadmap.

EE Times: How so?

Duggal: From top management down, the company is aware of the importance of our automotive business. If we need any IPs, software, ASIL [B or C or D] support for the next-generation Snapdragon processor architecture, we can request that. They will accommodate our needs by redirecting or making parts of IP or software reusable for automotive applications.

Literally, the architecture and software of [the] mobile SoC has been tweaked enough to accommodate automotive needs.

At Qualcomm, we have mastered the recipe of developing very successful software and hardware for the phone business. Our automotive team is taking advantage of it, which allows us to move much faster than our competitors serving the automotive industry, or an automotive industry struggling to keep up with changes.

EE Times: How did Qualcomm gain the automotive industry’s trust? 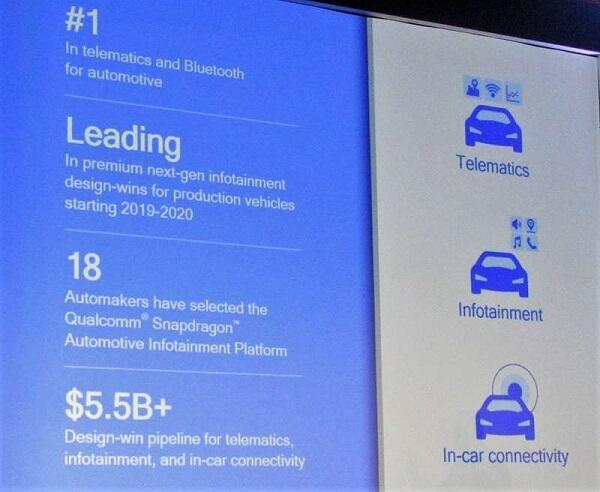 Qualcomm's explains the company's inroads into the automotive market at its press conference during the CES (Source: Qualcomm)

Duggal: Back in 2013, we had zero automakers using our Snapdragon-based cockpit solution. Now, 18 automakers are using Snapdragon. Our connectivity solutions, our focus to embrace the safety concept and our faster time-to-market won them over.

We can scale both in cost and performance. I think Qualcomm is the only automotive chip company with a 7nm automotive SoC (based on Snapdragon).

EE Times: Before the deal with NXP broke up, what was Qualcomm’s expectation of NXP?

Duggal: NXP is known for the diversity of their products in the automotive market. We regard them as subject matter experts on safety and respect them for having deep relationships with automakers. But when it comes to the in-vehicle infotainment market, we never thought NXP was our competitor. We’ve always believed that we’ve maintained a leadership position in that segment.

EE Times: Since when have you been working on autonomous vehicles?

Duggal: We began our stealth AV program in mid-2010. We’ve taken a system approach for autopilot. We’ve developed an autonomy stack that works as an end-to-end system. Incorporated in our autonomous vehicle — now driving on streets in Las Vegas — are cameras, radars and localization (map fusion). We call them three legs of ADAS technologies.

Our goal is to leverage our rich portfolio of IPs.

The car does self-navigation in highway autonomous driving, including automated lane changes. The vehicle comes with the ability for path planning, behavior planning, map fusion, cross calibration of sensors. We also apply deep learning to radars.

But our initial goal is, ‘Let’s do ADAS first.’

EE Times: If your AV is test-driving in Las Vegas this week, why are you limiting your demo to a select audience? Why are you not announcing your AV solutions publicly?

Duggal: We first want to get feedback from our customers. We want the knowledgeable people to tell us what they think of it.

Editor’s note: Details of Qualcomm’s AV test vehicles will be posted in a separate article later this week on www.eetimes.com.